The Impact of Believers

Grace French
Sister Survivor
President and Founder of The Army of Survivors.

The story of how I started seeing Larry Nassar for medical treatment is unusual in the fact that I did not go to him for a sports injury. The first appointment I vividly remember was for a wrist injury I got from playing a rough game of Red Rover on the playground. That day I sought treatment for a sprained wrist and ended up with a grown man, a doctor, with me on the medical table, massaging my breasts and thighs. I was only 12 years old. But it didn't stop there. I continued seeing Larry well into 2014 for dance-related injuries, and soon his “treatments” progressed to include penetration.

Larry's treatments weren't confined to the doctor's office. He "treated" me in the basement of my dance company’s performance venue, behind pulled curtains, as I prepared to go onstage for the Nutcracker. I saw nothing wrong with this, my only goal was to get back on stage so I could live my dreams.

Larry Nassar was my doctor. But I did not see him as my abuser. After all, my mom had been in the room at every appointment, he was an Olympic doctor, he treated all of the great gymnasts, figure skaters, and dancers…I wanted to be just like them. Even if I had told people I was uncomfortable with some of the treatments would they have understood why they bothered me? Would they even believe me?

After trying to ignore the news articles about my former doctor, I found myself watching the victim impact statements at his sentencing hearing. One after one I saw girls march up to tell their stories. Stories so similar to my own, in so many ways. I watched as people not only believed them but cheered them on.

Connecting the dots in my own story was devastating. I felt my whole world and reality crash around me. The weight of his abuse and his control over the way I, my family, and my community viewed him was too heavy even to comprehend.

As I began to share my story, I realized how impactful it was. Within days of sharing the truth of my abuse with my friends and family, multiple people had come to confide in me about their own experiences. I even had a mother come to me saying "thank you." Because of me sharing my story, she decided to have a conversation with her daughter about what abuse looked like, and what to do if it happened. I am so grateful to have been able to inspire that necessary conversation.

This only happened because my family, friends, and community were ready and able to believe in me and my story.

Because of experiences like these, I found a new purpose in sharing my story and advocating for others. I've attended multiple bill hearings at the Michigan State Legislature offering my support to help them pass, I have spoken at the MSU Board of Trustees meeting regarding my concerns about crass leadership at MSU and the harmful culture it has created, and I traveled to Washington D.C. to lend my support as a survivor at the Senate hearing involving MSU, USAG, and USOC leaders.

Last but not least, I have led the movement to form The Army of Survivors. 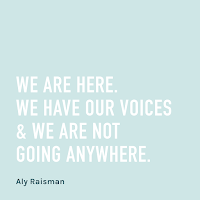 My journey through the hurt, devastation, and finally anger has led me to this. I feel incredibly empowered, listened to, and heard. My story would have been entirely different had I not been believed. This is why the Start by the Believing campaign is so necessary to change the culture today.

Start By Believing: Embracing The Movement

Words are important. They can be interpreted differently from person to person, and that interpretation stems from our life experiences. I attended my very first End Violence Against Women International conference in New Orleans back in 2015. At that time, I was a civilian Supervisory Special Agent with the U.S. Army Criminal Investigation Command and had approximately 14 years of investigative experience, most of which involved sexual assault, domestic violence, and child abuse.

When I first heard the Start By Believing phrase several years ago I was a little reluctant to embrace it. After all, at that time I was a detective who built a strong reputation for being able to substantiate or refute reports. My main concern revolved around the idea that if I embraced and vocalized a response in line with believing, it would make my investigation appear biased. In my heart I felt this would invite almost any defense attorney to introduce the notion that I did not give their client a fair shot, meaning I built the case around the Start By Believing concept and not the facts.

Later in 2015, I transitioned into sexual assault advocacy work. During that change, I wholeheartedly felt I could focus on believing. After all, that is the job of an advocate. As an advocate, I have come to realize just how powerful believing someone can be. It’s empowering. It’s supportive. It’s absolutely necessary for recovery. Especially with survivors who are dealing with self-blame or doubt. I have also come to the conclusion that feelings and emotions are far more powerful than words. By believing, we are able to attack the primary advantage predators have relied upon for years - disbelief.

If you’re an advocate, Start By Believing should be a given. If you’re a police officer, military leader, supervisor, someone’s friend, relative or co-worker, Start by Believing is critical to achieving your end goals, which is serving others and making our community safer. Why is that? Because someone who does not feel supported will have a hard time coming forward.

The fact that an extremely small percentage of offenders are actually held accountable for their actions should raise concern for all of us. It’s time to eliminate our immediate response of disbelief, and that requires us to at least Start by Believing - regardless of your connection to the victim/survivor, or the profession in which you serve.

If you’re still struggling with this concept, I can understand that. I know that my inability to fully embrace it as a detective was wrong. I understand that now. It just took me awhile to understand why.


If the most precious person in your life was sexually assaulted, would you want them to be believed? I’m inclined to think that everyone would respond with a resounding “yes.” Perhaps by collectively embracing Start by Believing, we will change culture in such a way that predators will find it extremely challenging to operate.  If so, we will also increase the likelihood that offenders will be held accountable. All we have to do is simply Start by Believing.

EVAWI has published several training bulletins to address some of the questions that might be raised by criminal justice professionals and allies.  We encourage you to click on the links below to learn more:

Start by Believing:  Evaluating the Impact of a Public Awareness Campaign Designed to Change the Community Response to Sexual Assault (July 2013)

Posted by EVAWBLOG at 9:07 PM No comments: