The Bill Cosby Dilemma: What’s at Stake in the Conversation

Since the 1960s, more than 50 women have come forward to report that Bill Cosby drugged and sexually assaulted them.  These women are diverse in age, race, economic stability and  geography.  Their reports are separated by geography and time, so it is difficult to imagine that they had an opportunity to meet and create a shared story.  In other words, it strains logic to “not  believe” them.

Most recently, Kevin Steele (the District Attorney in Montgomery County, Pennsylvania)  charged Bill Cosby with three counts of felony aggravated indecent assault, based on an incident that was reported to have occurred in 2004.  The report was made by one of the many women who described similar incidents.

The case might seem like an “easy win,” since Cosby had already made an important admission and the number of unrelated women who made similar complaints.    Testifying under oath in 2005, Cosby said he obtained several prescriptions for Quaaludes in the 1970s and offered the now-banned sedatives to others.   He was asked: “When you got the Quaaludes, was it in your mind that you were going to use these Quaaludes for young women that you wanted to have sex with?” Mr. Cosby said “yes.”   Yet despite this admission, Mr. Cosby has denied all criminal acts. So much for the “easy win.”

Interestingly, the outcome of the trial in June 2017 was perhaps best predicted by comedian Amy Schumer, in her Comedy Central show, “Inside Amy Schumer,” in a skit called:  “Court of Public Opinion – The Trial of Bill Cosby” (Season 3, Episode 6, which aired on May26, 2015).   The skit opens with the prosecutor’s final comments after weeks of presenting evidence.  The prosecutor is very professionally dressed and has stacks of paper on her counsel table:

“…In conclusion, the evidence clearly points to guilt.  The prosecution rests.”

The remainder of the skit features the defense. Ms. Schumer, acting as a defense attorney, enters the scene and turns on a boom box to play the theme song for The Cosby Show, in which Mr. Cosby plays the fictional Dr. Cliff Huxtable, “Americas favorite funny father figure.

Ms. Schumer dances to the song, makes jokes, and elicits laughs from the judge and jurors.  She then hands out Pudding Pops (which Bill Cosby advertised for years), and makes sure that each and every juror gets their own “Cosby sweater.”  In other words, she plays on the association between the beloved Dr. Huxtable and Bill Cosby, which is so strong that many people seem to believe they are the same person.  Schumer strategically paints a picture to influence the jury into believing Dr. Huxtable would never rape or sexually assault anyone. In one of the most insightful moments of this skit, Ms. Schumer states:

“This is the court of public opinion. If convicted, you may wince a little, you may feel a little pang, and none of us deserve that! We don’t deserve to feel that pang. We deserve to dance like no one’s watching, and watch like no one’s raping.”

In sum, Amy Shchumer – as Bill Cosby’s ficitional defense attorney -- focuses on his public image and persona as Dr. Huxtable, the character, to hide or to deny the true character of Bill Cosby, the person.

Although this was an amusing skit, it accurately illustrated some of the underlying dynamics of the real trial. Bobby Dugan, a juror who heard all the evidence in that trial concluded,

“What it really comes down to is who you gonna believe more. That’s all it was… Cosby’s fame and public persona played into those deliberations.”

While Dr. Huxtable is a fictitious character, the dynamics described by Bobby Duggan actually play out every day, in law enforcement investigations, prosecutorial decisions, and jury deliberations across the country and around the world.  It is a storyline that is so common, it was accurately predicted by a comedian, almost a full year before it happened. 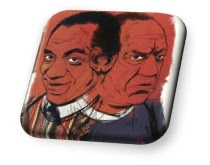 At this point, it may be useful to turn to the “theory of the third persona,” which asserts that each person actually represents three identities:  the public or first persona (which people in the community see), the uninhibited or second persona (which is experienced by close friends and family members) and the private or hidden persona (which may be seen by very few others).  This third, private persona is often completely unknown to others –  it is the part of ourselves that we may share with no one else at all.
According to the theory, many if not most sexual predators have a first, public persona similar to that of Bill Cosby and his alter ego, Dr. Cliff Huxtable. Unfortunately, we, as a society and members of the criminal justice profession, often believe that the first persona is the “real person.”  This makes it difficult to believe the person could commit a rape or sexual assault.
All too often, the focus of a law enforcement investigation and criminal prosecution has little to do with the facts of the case, but rather the credibility of the victim. The victim’s reactions, behaviors, and statements seem to be seen through a filter of a “motive to lie.”  Meanwhile, the suspect’s first, public persona gets all the attention, while the third, hidden persona (which committed and likely fantasized about the crime) remains undiscovered.
Victim Blaming Alive and Well

This presumption plays out in the criminal justice system so predictably because it is a functioning belief and norm of our contemporary culture. All one has to do is look at a few articles, news videos, or commentaries on social media (or the best tell of all, read the public comments accompanying these pieces) to discover that a great deal of the conversation about sexual assault, centers on the behaviors, perceived character, and decisions made by the victim before, during or after the report.  Further, public reporting and commentary are often rife with statements of regret and sorrow on behalf of the suspect. The Bill Cosby case illustrates this point, but it can be seen in many other cases of rape and sexual assault as well.

This presumption is also reflected in the common belief that sexual assault is simply the result of a “misunderstanding” – or another case of “he said, she said.”   As reported in College USA Today, Candice Jackson, the acting head of the Education Department’s Office for Civil Rights, told the New York Times that the overwhelming majority of sexual assault reports do not involve “even an accusation that these accused students overrode the will of a young woman.”

“Rather, the accusations — 90% of them — fall into the category of ‘We were both drunk,’ ‘We broke up,’ and six months later I found myself under a Title IX investigation because she just decided that our last sleeping together was not quite right.’”

Ms. Jackson has since apologized for these comments, but the words and beliefs are still there inside and outside the criminal justice system.
As we have seen in the media, public officials often make claims contrary to reality and research. Then, when challenged, they simply apologize for their “flippant” remarks. Yet the fact remains that victims of sexual assault are often scrutinized far more for their behaviors and decisions – and are more likely to be seen as “liars” –  than the suspects.
What’s at Stake

The criminal justice system depends on victims to voluntarily report crimes committed against them. True safety in our society then depends on the criminal justice system holding offenders accountable. This is one critically important strategy for prevention, because sex offenders often prey on multiple victims.  Just consider the 50 women who reported that Bill Cosby sexually assaulted them, before any criminal offense was prosecuted.

The sad fact is that our system continues to fail the majority of victims who voluntarily and bravely report sexual assault.  As a result, the vast majority of rapists are not held accountable for their crimes.  In fact, victims are often victimized a second time by the very system that is supposed to help them find safety, healing and justice.

It is about time to look at  how we collectively and individually view victims of sexual assault. Although it might be rare to have in excess of 50  victims come forward to disclose their experience, many offenders do have multiple victims. We must examine our biases and beliefs surrounding these crimes and continue to improve our responses.  All victims of crime should be treated with dignity and respect.

Finally, we must pursue accountability within the criminal justice system.  It is essential that law enforcement agencies take all reports of crime seriously and investigate them to the extent possible.  This is especially crucial for sexual assault because of the misperceptions and biases that surround the issue. There are strategies that can dramatically improve outcomes for victims, but they often require systemic changes and reforms.

This is a call to action!  Dr. Huxtable is a fictitious character, and so is the belief that our criminal justice system and culture hold most offenders accountable. We, the communities served, must work together to hold the criminal justice system responsible for its failures, and to recognize its successes.  We are all in this together.

Posted by EVAWBLOG at 9:50 PM No comments: